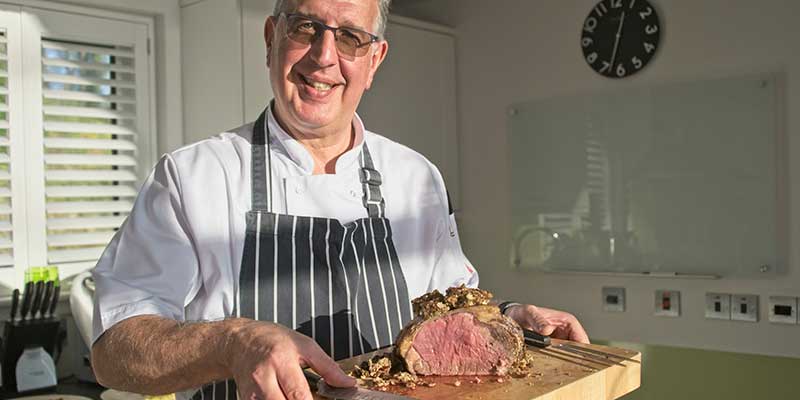 Aldi has teamed up with three renowned Scottish chefs to inspire people to try its range of Scotch Galloway Beef joints this Christmas.

The chefs will show customers how to re-create restaurant quality festive feasts using each of the joints from the comfort of their own home.

Each joint will be showcased in three video recipe guides created by chefs Chris Walker, owner of the Selkirk Arms Hotel in Kirkcudbright; 2019 Masterchef finalist Jilly McCord; and Craig Wilson, owner of Eat on the Green in Aberdeenshire, that will premiere on Aldi Scotland’s Facebook page this weekend.

Based in Dumfries & Galloway – the home of the Galloway breed –Chris Walker has developed a recipe using the Scotch Galloway Beef Sirloin Joint, which he serves with a hazelnut, mushroom and mustard crust and a mushroom and Port wine jus.

He commented: “Galloway Beef is the ancient native breed of my local area, so it was very exciting to be asked to help promote these fantastic quality Scotch Galloway Beef joints. One of the things that makes Galloway Beef stand out is its depth of flavour and tenderness. So I’ve developed a recipe that locks all those juices and flavour inside the joint, coating it in a stuffing-style crust that creates a mellow, festive accompaniment to the dish.

“Galloway has a reputation for being one of Scotland’s best kept secrets, and the beautiful flavour of Galloway Beef is also a hidden gem. I’m delighted that we can now share that local secret with the rest of Scotland, in the hope that everyone will appreciate the texture, the taste and the very special nature of Galloway Beef this Christmas.”

Travelling north, Jilly McCord has created a winter warming dish with the flavours of a classic Boeuf Bourguignon paired with the Scotch Galloway Beef Joint wrapped in Ayrshire bacon – a real Auld Alliance. Served whole and beautifully pink in the middle, this dish is enjoyed with creamy mashed potatoes and lashings of the beautifully rich sauce.

Graham Nicolson, Group Buying Director, Aldi Scotland said: “We’re thrilled to be able to offer our customers these three fantastic cuts of one of the finest types of beef Scotland has to offer at our everyday amazing prices. Scotch Galloway Beef is of the highest quality and enjoyed in restaurants around the world, and we wanted to show our customers exactly how some of Scotland’s top chefs would cook it this Christmas.

“Chris, Jilly and Craig have created three deliciously indulgent recipes that our customers can easily follow at home using quality produce stocked in our 96 Scottish stores.”

Aldi to strengthen Scottish presence with £35m investment in 2023