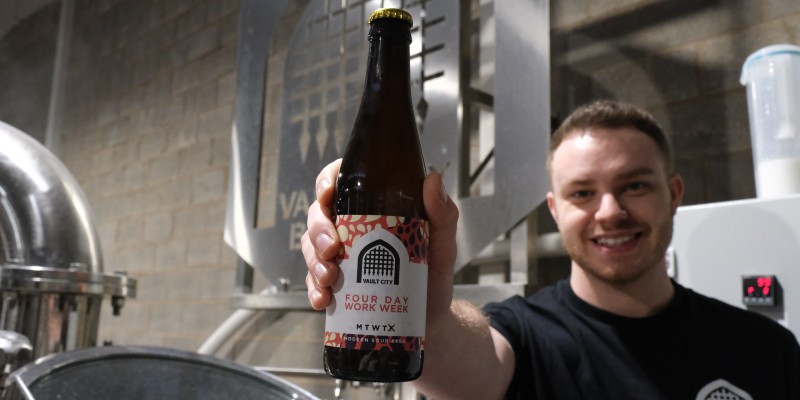 Scottish brewer Vault City Brewing has made the four-day working week permanent after an eight-month trial, becoming the first commercial brewery in the UK to adopt the scheme.

The Edinburgh-based brewer has made the move across its brewery, bar and office sites, as part of its commitment to create a “healthy and balanced” workplace culture.

The firm’s 13 employees now work from 8am to 5:30pm Monday to Thursday, with the working week reduced from 40 hours a week to 35.

The new working schedule was phased in over eight months from April last year.

Vault City Brewing Sales Coordinator Charlotte Brooker said: “The work/life balance it affords me allows me to enjoy my time to the fullest and arrange long-weekends away without needing to take time off.

“I feel less tired, more mentally and emotionally well rested and generally just better. I don’t think I could go back to a five-day week now.”

The four-day week concept had bene in Co-founder Steven Smith Hay’s mind since he left a corporate career, which included spells at BT and TSG to start the firm in 2018.

A four-day working week is completely unheard of in the brewing world, an industry which has developed a reputation for long hours and hard graft,” he said.

“To be honest, that was part of my motivation – to create a different way of working. It hasn’t come without its challenges, though. As the first commercial brewery in the UK to offer this way of working to our team, there was no blueprint to follow.

“Initially it takes discipline not to fall back into old habits of a five-day working pattern, especially because many of our customers work in hospitality where weekends are often when they’re most active,” Smith Hay added.

Although the office teams at Vault City adapted quickly to the new work schedule during last year’s phased introduction, the brewing arm of the business threw up more obstacles – particularly as fermentation does not work to a set timetable.

“There are certain situations when brewing and packaging releases which can change quickly and require immediate attention. In those moments we’ve had to use overtime pay to make sure we kept things under control,” Smith Hay noted.

“It’s not something you want to become habitual, but it is necessary from time to time, and crucially it’s fair.”

A trial of a four-day week without pay reduction is set to take place in Scotland, with 30 businesses already signing up to a trial in England and Wales set to begin later this year.

The pilot programme was announced in January and was launched by 4 Day Week Global in partnership with think tank Autonomy, the 4 Day Week UK Campaign and researchers at Cambridge University, Oxford University and Boston College.