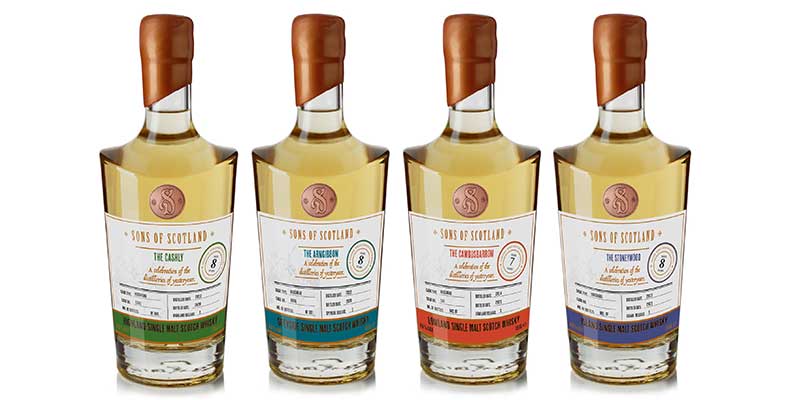 Stirling Distillery has launched two new whiskies, the Cambusbarron and the Stoneywood, to complete its Sons of Scotland independent bottling range.

Following the release of its first two single cask whiskies, the Cashly and the Arngibbon in January, the two latest whiskies are available now in both full-sized bottles and miniatures.

The distillery’s co-owner Cameron McCann, spoke about the latest arrivals: “We are delighted to complete the first series with these two light and rich whiskies, each having very different characteristics. As single cask malts, they have been matured in barrels to flavour the whisky – the Stoneywood spent seven years maturing in a bourbon barrel and the Cambusbarron was kept in hogsheads for eight years. The Sons of Scotland collection is a celebration of Stirlingshire’s rich whisky making heritage and we look forward to building on that history.”

The Sons of Scotland range features whiskies from across Scotland, including the Highlands, Speyside, the Lowlands, and the Islands.

The Cambusbarron is a strong player, coming in at 61.3% ABV cask strength and is the range’s Lowland single malt. It is a limited edition release of just 295 bottles.

The Stoneywood is 50% ABV single malt representing the Islands single malt and limited to 299 bottles.

The Sons of Scotland collection heralds Stirling’s plans to produce its own whisky onsite, with a goal of releasing its first single malt in 2024.