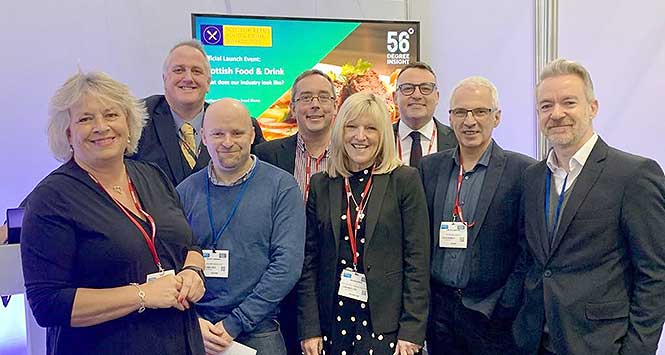 The new Scottish Retail Food & Drink Awards were officially unveiled this week (20 January 2020) at Scotland’s Speciality Food Show at the SEC in Glasgow.

The Awards were formally launched by directors Helen Lyons and Antony Begley who hailed the initiative as “a very timely and very significant opportunity to get more of Scotland’s fantastic quality food and drink products onto more shelves in Scotland.”

Scotland’s £14bn food and drink industry employs almost 19,000 people and the Awards founders believe that the huge growth in consumer interest in food provenance over recent years can be harnessed by an initiative designed to bring producers and retailers closer together with the ultimate aim of making outstanding Scottish products more easily available to a much wider audience in Scotland.

Speaking at Scotland’s Speciality Food Show, Helen Lyons said: “We all know that Scotland has some of the best food and drink producers on earth and we know that more and more consumers are interested in buying home-grown products. The Scottish Retail Food & Drink Awards will respond to that increasing consumer demand and will be to the benefit of everyone involved from producers and suppliers to wholesalers, retailers and, ultimately, to consumers themselves.”

The official launch was followed by a panel discussion chaired by Lyons and Begley discussing the biggest current and predicted trends in Scottish food and drink and examining in detail the critical issue of how smaller producers can go about securing listings in retail outlets in Scotland, big and small.

The panel featured a selection of industry experts taking questions from the audience and offering hands-on, real world advice to the many small producers in attendance. The panel included:

Entries will be welcomed from all companies that produce and market products in Scotland for the Scottish retail marketplace, from discounters to supermarkets, from convenience stores to farm shops and everyone in between. The intense judging sessions will take place over two weeks in July with the food categories judged at Glasgow Caledonian University and the drinks categories judged at the Liquid Academy, also in Glasgow. Every product that is entered into the Awards will be judged in precisely the same manner by a highly experienced and expert judging panel drawn from across all aspects of the food and drink industry.

Begley commented: “The robustness, depth and transparency of the judging process lies at the heart of the Scottish Retail Food & Drink Awards so we are delighted to be working with two fantastic judging venue partners in Glasgow Caledonian University and the Liquid Academy.”

The Awards themselves will be hosted in October 2020 in Edinburgh.

What does the lead buyer at Harrods look for in a new product?

The fine art of judging awards