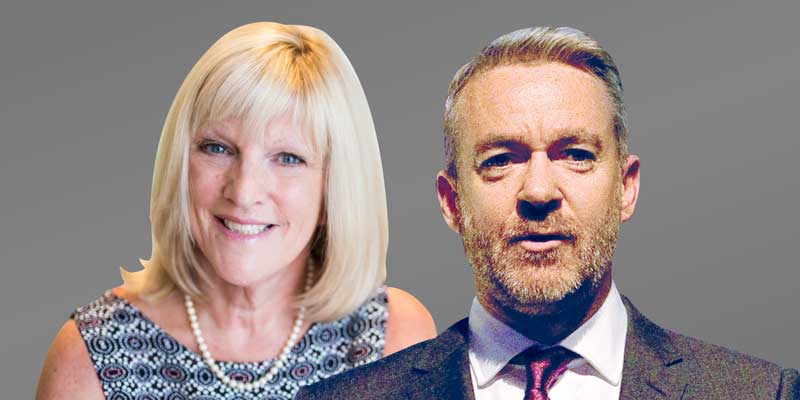 Scotland has long enjoyed an enviable reputation worldwide for the outstanding quality of its natural larder and its thriving £14bn food and drink industry is testament to the passion and commitment that almost 19,000 Scottish food and drink businesses bring to this vital sector.

The huge growth in consumer interest in food provenance over recent years has led two food and drink media specialists to launch a brand new awards programme to recognise and reward the many producers, suppliers and retailers who are helping reinforce Scotland’s well-earned reputation for producing some of the best food and drink on the planet.

The Scottish Retail Food & Drink Awards is being launched by Helen Lyons (pictured), who has extensive experience bringing awards programmes to fruition, and Antony Begley (pictured) of 55 North, the Glasgow-based publishing house specialising in food and drink retailing. Both are thrilled to have enlisted the support of Glasgow Caledonian University (GCU), a centre for excellence in food science, as one of their key partners.

Helen Lyons said: “The Scottish Retail Food & Drink Awards aim to seek out and recognise businesses and enterprises of all sizes from all corners of Scotland. Interest in provenance, locally and nationally sourced products has arguably never been higher than it is today. These new awards aim to provide a fantastic platform to bring more producers and retailers together. Our goal is simple; we want to bring producers and retailers together to get more of Scotland’s fantastic products onto the shelves of more stores throughout Scotland.”

Entries will be welcomed from all companies that produce and market products in Scotland for the Scottish retail marketplace, from discounters to supermarkets, from convenience stores to farm shops and everyone in between.

“In the last 12 months sales of own label products have continued to grow in Scotland. The Scottish Retail Food & Drink Awards will shine a light on some of the incredible innovation that continues to develop in this exciting area of the market”, Lyons added.

Co-founder Antony Begley commented: “We all know that Scotland has some of the best food and drink producers on earth and we know that more and more consumers are interested in buying home-grown products.

“The Scottish Retail Food & Drink Awards will respond to the increasing consumer demand and will be to the benefit of everyone involved from producers and suppliers to wholesalers, retailers and, ultimately, to consumers themselves.”

As with all prestigious food and drink awards, the Scottish Retail Food & Drink Awards is supported by a panel of distinguished judges which will be led by internationally-renowned food expert Jane Milton and a large team of highly respected independent food and drink experts.

Official ambassador for the awards will be Bruce Langlands, a highly esteemed figure and former Director of Foods at Harrods and Director of Food & Hospitality at Selfridges.

Lyons commented: “The robust and entirely transparent nature of our judging process means that when consumers buy a product that carries a Scottish Retail Food & Drink Awards winners logo they can be 100% certain that they’re getting the best of the best, as judged by some of the most experienced independent judges in the industry. Judges will identify food and drink products of the highest quality from every part of Scotland, reflecting the hard work and creativity which is characteristic of the Scottish food and drink industry.”

Begley continued: “We have had an overwhelming response from retailers and manufacturers so far and we expect the standard of Scottish entries to be outstanding. The Scottish Retail Food & Drink Awards will be recognised as a stamp of excellence among consumers and retailers alike. It will be a fantastic achievement and a tangible sign of the quality and excellence, which reflects the ever increasing commitment by Scottish food and drink producers in this competitive industry.”

For many companies taking part in the Scottish Retail Food & Drink Awards, research and experience shows that winning an award will deliver real business benefits including increasing profile and increasing sales. Research partners to the awards are Edinburgh-based consumer research experts 56 Degree Insight, and the Scottish Retail Food & Drink Awards has joined forces with The Times Scotland, The Sunday Times Scotland and The Scottish Sun as consumer media partners.

Lyons concluded: “The movers and shakers of the Scottish food and drink industry have helped place Scotland on the map as one of the most in demand locations within the UK to establish a retail business. Our job will be to showcase their excellence.”

The awards will open for entries in January and will close in May. Judging will take place during June and July with the awards presentation taking place in October 2020.