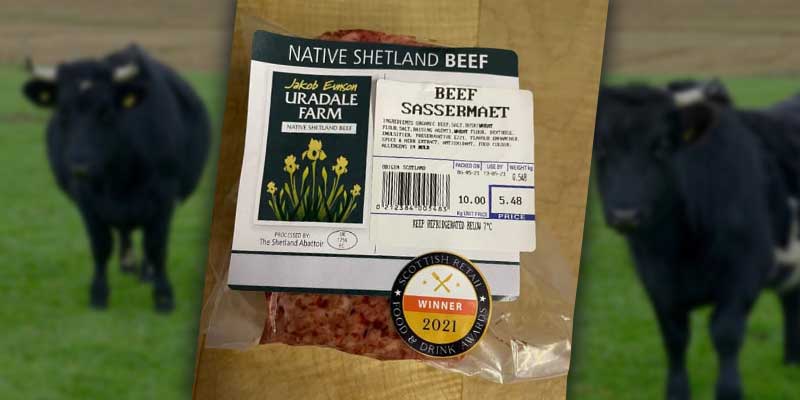 Not only did Shetland-based Uradale Farm’s Beef Sassermaet pick up the Small Producer Award in the Meats – Burgers and Sausages category at last week’s Scottish Retail Food & Drink Awards, but it now looks like the product has also taken the prize for the first award winner to get the SRFDA logo onto packs!

For the uninitiated, sassermaet is a spicy ground beef produced from Shetland kye – the breed of cow that’s been indigenous to the islands since the second ice age – and was originally made as a way of preserving meat in the days before refrigeration.

Now Uradale Farm, which has been organic since 2003, is picking up rave reviews as well as awards for its sassermaet which, unlike many other burgers and sausages, is made from the meat of a single animal.

Charlie Turnbull is the founder and director of leading online wholesale platform Delishops, which is also an SRFDA sponsor. In a ‘Delishops discovers’ interview with Uradale’s Jakob Eunson, Charlie said he “wouldn’t want to eat a burger made out of anything else” after tasting the award-winning product.

Saying that the award means a lot to him, Jakob added that winning would “help promote the high value products we have here in Shetland”.

If the islands’ other small suppliers are as good as he is at shouting about their products then we can expect to see a lot more of them on shelves soon.

Prepare to meat your maker