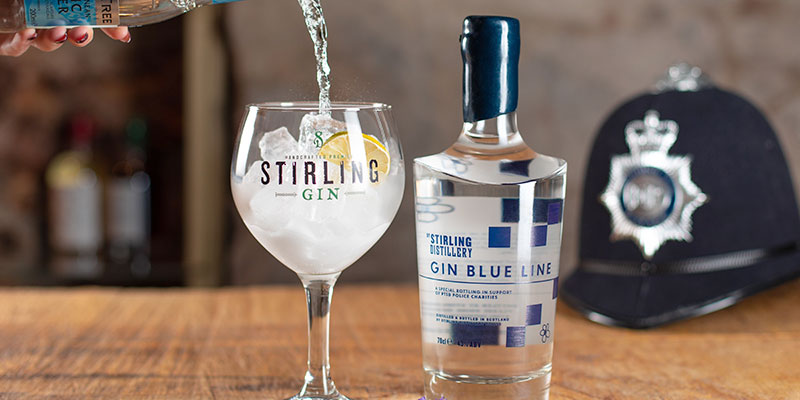 Stirling Distillery has launched Gin Blue Line gin. a special bottling to raise money for police officers, both past and present, who suffer with PTSD.

Co-founder of the distillery Cameron McCann is a retired Met police officer, who served in the force for 21 years. His network of retired police officers asked if he would create a special gin to raise awareness of, and much needed funds for, police charities supporting those suffering from work-related mental health illness within the British police forces.

Twenty per cent of Gin Blue Line profits will go to a range of charities including Police Care, which supports serving and veteran police officers who have suffered any physical or psychological harm as a result of policing. The distillery has already sold over 250 bottles in pre-sales.

Made with carefully selected botanicals including forget-me-nots, Scottish heather, sage and kaffir lime leaves, this gin is bottled at 43% and is the first to be created by Stirling Distillery’s new head distiller Lisa Matthews.

Matthews spoke about her creation: “I wanted to make a very well-rounded, versatile gin that could pair with many types of tonics and garnishes. I especially enjoy Gin Blue Line paired with a Mediterranean tonic and a zesty, citrus garnish such as lemon or lime, or with a traditional Indian tonic and pink peppercorns to enhance its spicy kick. It has floral elements, spicy notes and a smooth citrus base that will suit a range of tastes.”

The distillery celebrated the launch of the Gin Blue Line gin at Stirling’s Old Town jail on Wednesday 10 November. Local businesses, business partners and members of the distillery’s Join the Journey private membership all turned up to celebrate along with the distillery team and McCann’s former colleagues.

One serving officer attending the launch said: “I am a TRiM manager (a peer-delivered support system, designed specifically to help in the management of traumatic events) as part of my role, so to see the issue of mental health in the police being highlighted is great! I came along tonight to show my support for this fundraising imitative.”

Following the police theme, the distillery has launched a social media campaign to promote Gin Blue Line. The Twitter account @Stirlingyard has been created to provide surveillance on anyone drinking gin that isn’t Stirling Gin Blue Line. Stirling Yard will intercept people using #gin hashtags, and reply to guilty drinkers with police-themed comments, images, gifs and videos. The ‘Ginterceptors’ will offer discounts on Stirling Gin to people who ‘tip off’ the @StirlingYard unit by sharing pictures of their friends drinking ‘other’ types of gin.

Hand bottled and waxed at its distillery in the shadow of Stirling castle, Stirling’s 70cl bottles retail at £35 and 5cl mini-bottles are £5. They can be ordered online or in the distillery shop.

Gin Blue Line will be a permanent addition to the distillery’s range of spirits, raising money and awareness of police mental health charities for years to come.