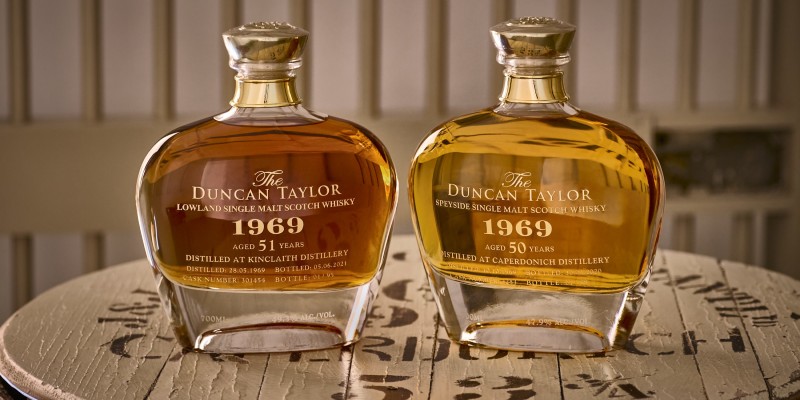 Scotch whisky producer Duncan Taylor has released two rare whiskies as part of their ‘Rarest of the Rare’ portfolio.

The launch of a Kinclaith 51-year-old and Caperdonich 50-year-old form part of a collection of rare whisky casks from closed distilleries, that Duncan Taylor Scotch Whisky has matured in their warehouse for half a century.

This marks the first time the Aberdeenshire bottler launched drams dating back over 50 years.

A limited release of less than 100 handcrafted glass decanters is available for each whisky worldwide.

The bottles will be individually numbered and engraved as well as housed in a beautiful lockable framed box, inside a brushed stainless steel carry case.

Kinclaith’s origins date back as far as 1957; located on the south side of the river Clyde, this small malt distillery was housed within the massive Strathclyde grain distillery complex.

The ingredients were all locally procured and the liquid matured in a combination of American and European oak casks over an 18-year period. Unfortunately, it was closed in 1975 and demolished to make way for an extension being built at Strathclyde.

Caperdonich’s conception dates back much further to 1898; mothballed for approximately six decades Caperdonich’s production was reinstated in 1965 to fulfil demand for Glen Grant, culminating in the expansion of the Caperdonich distillery site in 1967.

The new pot stills were steam heated which was a very modern technology at the time and the whisky was given a new appellation in 1966, Caperdonich. The name was chosen after its water source.

The 51-year-old Kinclaith is  gold in colour and on the nose boasts fragrant sweet oak notes.

The 50-year-old Caperdonich delivers malty and sweet tasting notes. On the palate, it features caramel notes topped with cinnamon, rounded off by warm spices and oak.

Commenting on the launch, Chairman Euan Shand, said: “I feel it is a privilege to be the custodian of these stunning rare casks. Originally filled back in 1969 it’s the start of an exciting chapter at Duncan Taylor as we plan to release a selection of rare malts from our portfolio over time.”