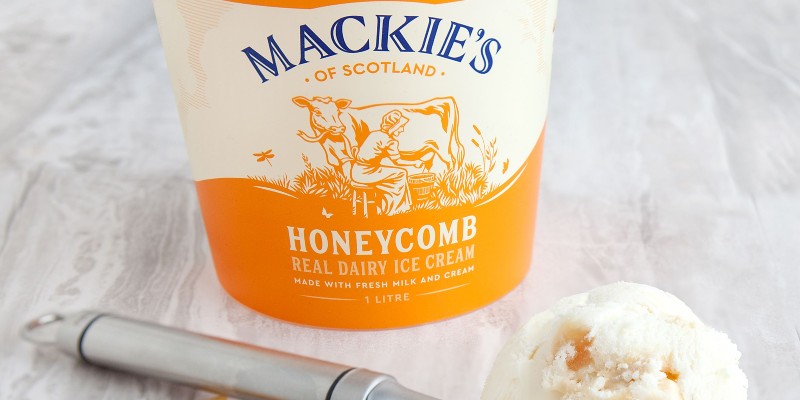 Mackie’s of Scotland has enjoyed increased turnover to £18.5m in the year ending 31 May 2021, driven by growth in the UK premium ice cream market.

Operating profit at the Scottish ice cream producer rose by 19% to £4.1m in the same period, as sales in England and Wales increased by 40% with second and third listings proving popular in stores including Sainsbury’s, Asda, the Co-op and Marks & Spencer.

The growth followed a year of investment in the brand with new packaging, new website and digital advertising campaigns throughout the year.

What’s more, Mackie’s range of chocolate bars enjoyed a 15% uplift in UK sales, while Mackie’s generated income from its investment into renewable energy, which delivers surplus energy into the grid and comprises a 7000 panel solar farm, four large-scale wind turbines at the fourth-generation Westertown Farm as well as a biomass plant.

In addition, Mackie’s continued to invest in its biggest project to build a £4.5m low-carbon refrigeration facility.

Supported by the Scottish Government’s Low Carbon Infrastructure transition programme, it is due to complete this spring and is expected to enable a reduction in energy use of up to 80%, contributing to the company’s objective of being 100% self-sufficient in renewable energy.

Mackie’s Managing Director Mac Mackie said: “Against a backdrop of the pandemic’s impact on consumer confidence and rising production costs, we are very pleased to have delivered a robust performance and positive financial results which show steady growth for the eighth consecutive year.

“For the current trading year, sales to our major retailers remains strong, but overall company performance will be affected due to continuing cost increases, and profit is forecast to be lower than in 2020/21.”

The company is now focused on trialling new flavours and product formats for 2023, while also concentrating on export growth in Asia, assisted by improved product ranges.

Taylor family buy out final shares from Mackie’s of Scotland