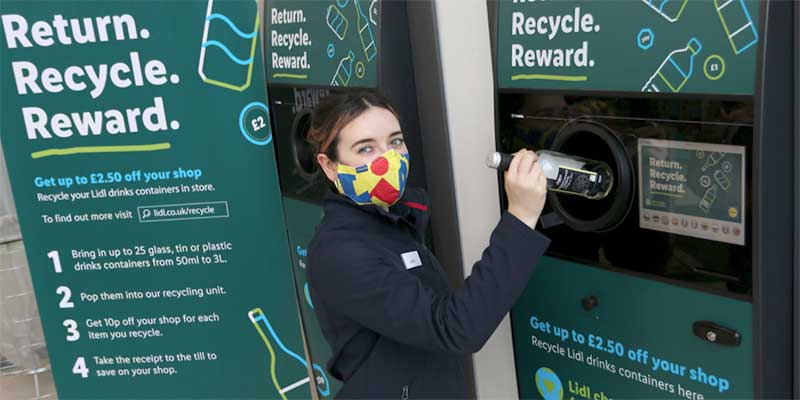 Lidl has commenced a deposit return scheme trial at selected stores ahead of the Scottish Government’s nationwide rollout next year.

Deposit return schemes are already established in many countries where they are helping to tackle climate change and reduce litter. In a bid to encourage more Scots to recycle, the eco-friendly trial by Lidl will see many shoppers use reverse vending machines for the first time.

As part of this testing phase, Lidl will gather key insights ahead of installing the recycling facilities across all its 105 Scotland stores by July 2022, when the scheme goes live nationwide.

Ross Millar, Lidl’s Regional Director for Scotland, said: “This is a huge milestone for Lidl, and one we have been working towards for several years. We’ve made a significant investment to install large scale, contactless, user-friendly and future-proofed machines for our valued customers.

“This initiative reinforces our commitment to sustainability, enables our shoppers to redeem money to spend in-store and supports the Scottish Government in reaching its waste reduction targets.

“The trial will help consumers get to grips with these recycling stations, the first of their kind in the GB, by showcasing the benefits and ease of using them. We look forward to rolling out the best performing solutions to all of our Scotland stores in the year ahead.”

Undamaged empty bottles and cans originally purchased in Lidl can be returned to dedicated recycling stations at selected stores where shoppers will be rewarded a redeemable voucher.

Included in the recycling scheme are undamaged soft drinks bottles and cans, water bottles, wine bottles, beer bottles and all aluminium cans, each worth 10p, with a maximum voucher value of £2.50, redeemable to spend back in the store.

Once collected, the bottles and cans are then recycled to become new drinks containers, creating a circular economy, and using less natural resources and energy.

In preparation for the trial, Lidl worked closely with the Scottish Government and its key delivery partners, including Zero Waste Scotland.

The environmental body has supported the implementation of the deposit return scheme by consulting throughout the development process since 2018.

Commenting on Lidl’s trial launch, Iain Gulland, Chief Executive of Zero Waste Scotland, said “Scotland’s deposit return scheme will make it easy for everyone to do something good for the environment.

“It’s great that this trial will give people the chance to give it a go for themselves and see just how straightforward it is. Just by taking back your empty bottles and cans, you’ll be helping to put a stop to the waste of raw materials that are driving the climate crisis.”

Lidl launches Good to Give trustmark to diversify food donations