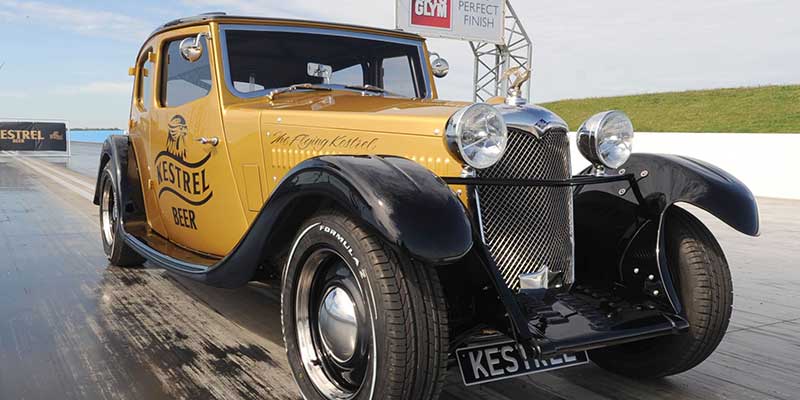 Scottish beer brand Kestrel has launched a major international marketing push built around a new globally-distributed TV documentary series which tells the story of The Flying Kestrel, the company’s transformation of an abandoned 1930s Riley Kestrel car into a land speed record breaker.

The new two season show will be broadcast to over 300 million people worldwide from March 2021. A new 40-second TV commercial ‘Brewed for the Bold’ is set to be released to coincide with the show’s launch, backed by a marketing campaign that spans print, social and digital, PR and e-commerce. The brand is targeting multiple markets including the US, China, India, Australia and South Korea.

Production for the series started last year with filming at the Santa Pod Raceway where the car was unveiled by TV presenter and star mathematician Rachel Riley.

Season One documents the ‘blood, sweat and beers’ journey of Nigel McNally, founder and CEO of Brookfield Drinks and his son Joel McNally as they set about transforming a rusted heap recovered from a barn in Holland into a turbo-charged racer capable of speeds of over 200mph. Alongside a glimpse into the work of engineer Jonathan Webster, it is not all plain sailing with some dramatic setbacks along the way. With filming ongoing, Season Two will tell the final story as the team goes for glory, which is far from guaranteed.

The car – with its turbo charged 2.5 litre, 5-cylinder engine capable of 900bhp and speeds of over 200mph – is gearing up to become a roving brand ambassador with its own range of clothing and merchandise, dedicated website and social media channels and a busy schedule of guest appearances at live shows and events across the UK and internationally when they restart.

He commented: “In true Kestrel fighting spirit, we have nurtured and developed The Flying Kestrel project throughout the pandemic, giving the beautiful old car a new lease of life and finally uncovering its true potential. It’s the perfect showcase for our brand and testament to some important traits we have always held dear – unflappable teamwork, the ability to overcome adversity and the power in following your dreams and sticking your foot down on life’s accelerator.“